The Oklahoma Legislature followed the safety statistics in both Idaho and Delaware. The Oklahoma House passed House Bill 1770 with an overwhelming vote of 76-13 on March 11, 2021.  On April 20, 2021 the Oklahoma Senate approved the Bill and sent it back to the House for further consideration.

My compliments to Representative Dobrinski and his Staff.  House Bill 1770 sets forth a straightforward and easy-to-follow-standard for bicyclists to apply at intersections: 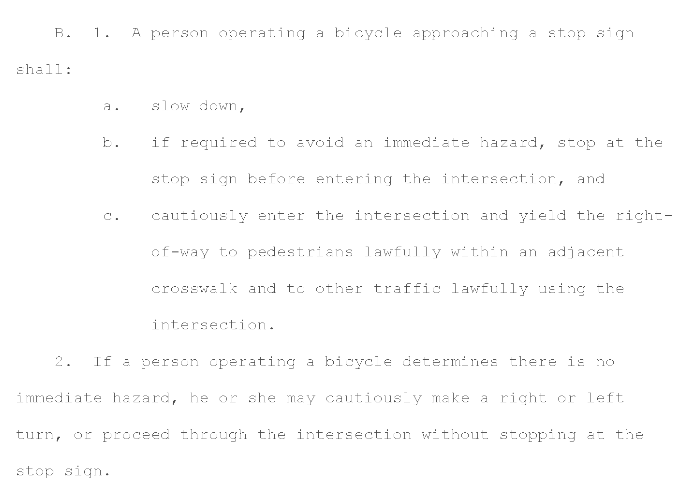 An “immediate hazard” is defined as “a vehicle approaching a person operating a bicycle at a proximity and rate of speed sufficient to indicate to a reasonably careful person that there is a danger of collision or accident.”

Where a bicyclist is making a right-hand turn at a steady red traffic-control signal, he or she may “roll” the intersection provided, he or she “slow[s] to a reasonable speed and yield[s to] the right-of-way, if required, to oncoming traffic that constitutes an immediate hazard[.]”

House Bill 1770 also makes it a crime of reckless driving for a motorist to “taunt or maliciously throw an object at or in the direction of any person riding a bicycle, equine or animal-drawn vehicle.”  This only appears to be a misdemeanor offense as the maximum penalties are six months in prison and a One Thousand Dollar fine.  House Bill 1770 also prohibits drivers from “us[ing] a horn when passing a person riding a bicycle, equine or animal-drawn vehicle under normal conditions if no imminent danger of a collision exists.”

This is very encouraging news out of the State of Oklahoma.  I would love to see similar legislation regulating intersections in Kentucky and Ohio.

Elected Officials, Policymakers, and Traffic Engineers can do much to design, redesign and retrofit existing roadways to make them safer for those vulnerable users.  We can do something too.  We can be vocal advocates for the deceased and their families.

I am struck by the totally preventable deaths – in particular those involving drugs and/or alcohol use.  Just last month, on March 1, 2021, Bradley McNally, only 33 years old, was struck and killed on his bicycle in Bell County, Kentucky by an impaired driver who fled the scene.

Last year, Steve Adams, a friend, was struck from behind on a morning ride in Cincinnati and ultimately succumbed to his injuries.  Again, the driver fled the scene.  We have ordered the police report and investigation file – whether impairment was an issue remains an open question.

In 2017, William Rust was struck from behind on U.S. 52 by an impaired driver who fled the scene. William was 61 and survived by his wife and children.

In 2016, again on U.S. 52, Michael Prater, a friend, was struck from behind on a training ride and killed, again, by an impaired driver who fled the scene.  Michael was 42 and survived by his wife and children. His son was three years old, and his daughter was only four months old.

We will never know whether immediate medical attention would have mitigated the injuries of these cyclists.  We do know that the drivers were cowards selfishly motivated to protect themselves at the expense of a dying cyclist.  More needs to be done in the charging and sentencing of these cowards.  Their cowardice may have cost these men their lives.  Their criminal sentencing should send a message to all users of Kentucky and Ohio roadways.

Many of us will not forget March 13, 2020.  That date is doubly significant for me. At 10:00 a.m. I had resigned from my secure corporate litigation job to hang a shingle to represent cyclists in Kentucky and Ohio.  By 3:00 p.m. Governor Dewine had begun the inexorable “lockdown” process to “flatten the curve.”  Governor Beshear would soon follow.

Needless to say, in-person marketing (the lifeblood to any organization which needs to generate revenue or raise capital) was put on a bit of a hiatus.  Professional and college sports went on a hiatus until team doctors and administrations figured out how to operate in “a Bubble.”  Church services went online; schools went online; work went online; groceries went online; even bike racing went online.

Online bike racing?  I get Canyon/SRAM finding riders online based on power numbers and I sort of get Zwift Academy.  But what about “The Rules”?  For a Road Cyclists, these are the 10 Commandments or 95 Commandments as it were.  There is absolutely no reference to “online” or “Zwift” or “Smart Trainer” in The Rules.  As an attorney, I would argue that Rules #5 and #9 resolve the question of Smart Trainers and online platforms, but I digress …

The point of riding a bicycle is to be outside with friends.  The point of living is to be with loved ones.  If you are lucky, the two will meet.  “Online” living, riding, and racing does not allow you to be with – “online” is a poor facsimile for the real thing.  So fast forward to March 27, 2021, exactly one year, and two weeks later I was back to racing!  And boy did I need it – more than I knew.

Death March.  It is an (almost) annual tradition for me dating back to 2013.  Allow me a quick plug for the Race.  If you love gravel, do it.  If you love mountain biking, do it.  If you love adventure racing, do it.  If you love racing with friends, do it.  Here is the premise:  find a bunch of cemeteries that are assigned time bonuses with whatever route you chose, and the lowest time (calculated by actual time minus bonuses) wins.  There are some other rules, but that is the gist of it.  What follows is a “sort-of” race for most racers.  I say sort-of because everyone is not taking the same right turns, so during the race no one really knows who is winning until the end of the race.  This promotes much comradery and cooperation on the course because the cemeteries can be hard to find (more on that later).  You can flog yourself as hard as you choose between cemeteries, knowing that one navigation error is the equivalent of burning all the matches you have in your box, and then some. The vibe is chill, and everyone looks forward to a post-race beer.

This Year’s Edition was unusually kind weatherwise.  The race started out at 39.2 degrees and ended at 78.8 degrees and sunny throughout.  Almost like God gave us a hall-pass on the weather.  In the 2019 Edition, the weather averaged 34 degrees with lightning and thunderstorms – which can feel really, really REAL on the top of an exposed ridgeline.

However, this Year’s Edition was not equally kind on race-day mandatories.  Well, not kind to those of us who started their route-planning at 10:00 p.m. on March 26, 2021 because his son had a high school lacrosse game under the lights.  One under-plans at their own peril.  I have made under-planning an artform.  Just ask my Pal Charlie.  I invited him down all the way from Michigan in 2015 with NO MAP between us and only my 2013 route loaded on my Garmin 500 – remember those?  Not much of a navigation screen to work off.  Lose a GPS signal and you get lost pretty quick.

Well, history has a way of repeating itself.  Fast forward to March 26, 2021 11:30 p.m.  I was much more prepared than my 2015 navigation disaster — or so I thought.  My new partner, Nate (he is not really new, we did it together in 2013) had a brand-new Karoo 2 with all the GPS coordinates downloaded and I had my trusty laminated National Geographic Topographical Map with all the cemeteries called out with red and yellow stickers.  Red for mandatory, yellow for optional cemetery checkpoints.  By 11:30 p.m. I had found all the cemeteries on my topographical map. 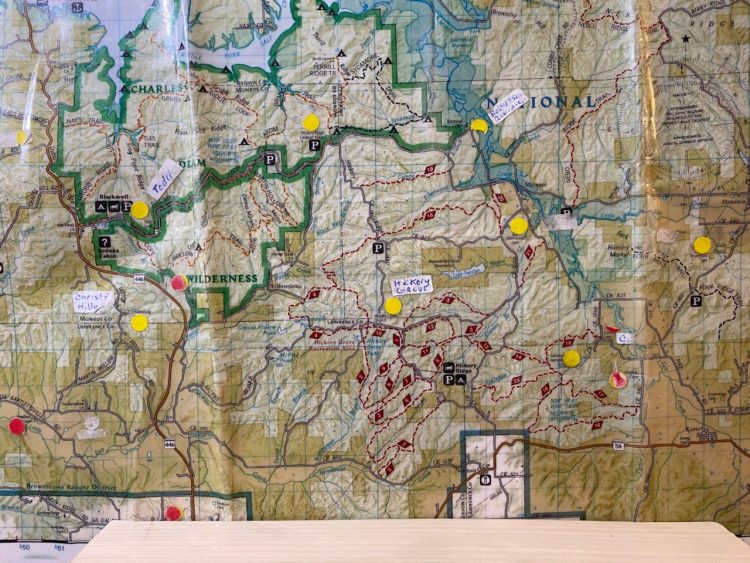 In my defense, how hard is it to find a cemetery, right?  You find a road, you ride along it until you see a cemetery, stop, take and picture to prove you were there, and then ride on to the next checkpoint, right?  Wrong.  This thinking only applies to cemeteries on paved roads.  The Callahan Cemetery dates back to 1812 and there are no paved roads to get you there.  A little history lesson from a geocaching website:

Jesse and Eve Callahan aged 22 and 17 were among those couples. Sometime around 1817 Jesse Callahan bought 160 acres of land in a valley just west of Cornett grove cemetery for $1.25 an acre. Jesse and Eve died around 1865 and had 8 children over their lifetime. Jesse and Eve and most of their adult children are buried in the Callahan Cemetery.

There are at least 25 headstones in the cemetery, most are unmarked flat creek rock, and there are some graves that have no marker. In Jesse’s time the main east-west road ran past Cornett Grove on to his farm and forked. The south fork wound through the valley and came out on Hickory Ridge Rd. just north of Norman. The North Fork climbed to the top of the ridge, passing the cemetery, and going along the ridge top to near where the other fork came out just north of Norman, on Hickory Ridge. Sometime around 1900 The Hoosier National Forest was formed and took all the land from Cornett Grove to Norman. 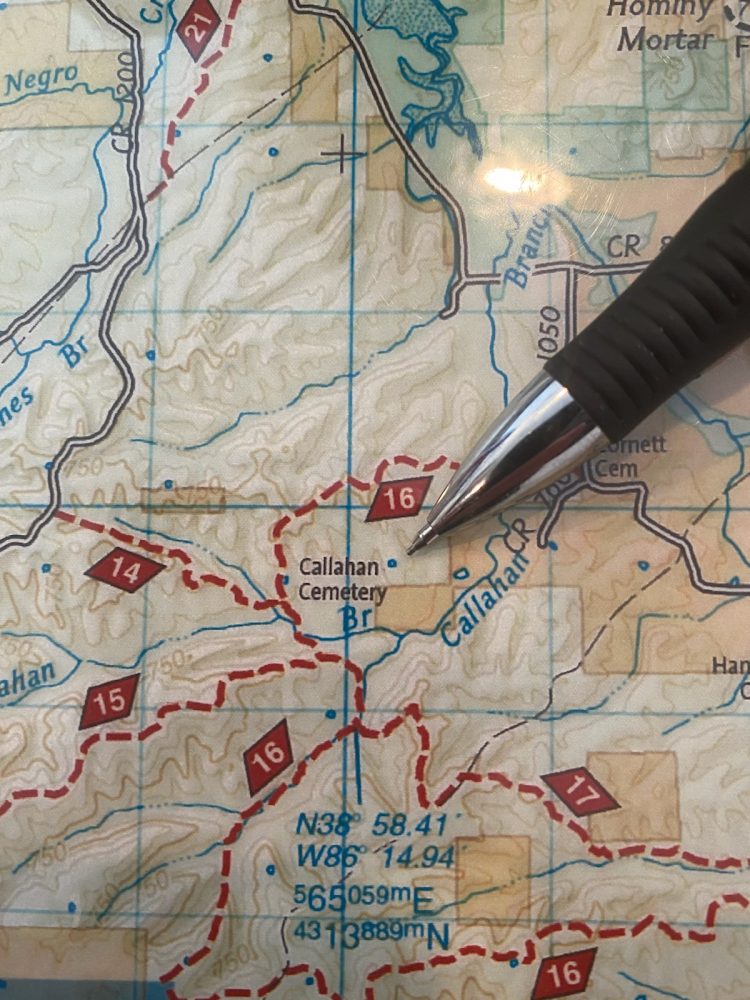 I learned, over a beer, at the finish line from a Local, “that everyone around here knows Callahan is off Trail 15 and ‘The Map’ is wrong.”  You mean that map that cost me $14.95 for the waterproof and tear-resistant version?!?

Strava Screenshot of Callahan Cemetery from 2917 Edition of Death March

In my humble estimation, it is these kinds of idiosyncrasies that make Death March, well Death March.  Technically, Nate and I are DNF. I would humbly suggest that Death March needs to add a DNF-M for those racers who, like me, got lost in 2013 or could not find a mandatory in 2021.  Adding an “M” to Did Not Finish [all] Mandatories would restore a small measure of dignity.  I still got over 6 hours in the saddle (and over one and half hours of hike-a-bike along horse trails) and 70 miles of sweet gravel/road/single track in my legs.  And I had a fine cold beer from Upland Brewing Company waiting for me at the finish line.  I had been waiting over a year for that beer and it never tasted better. 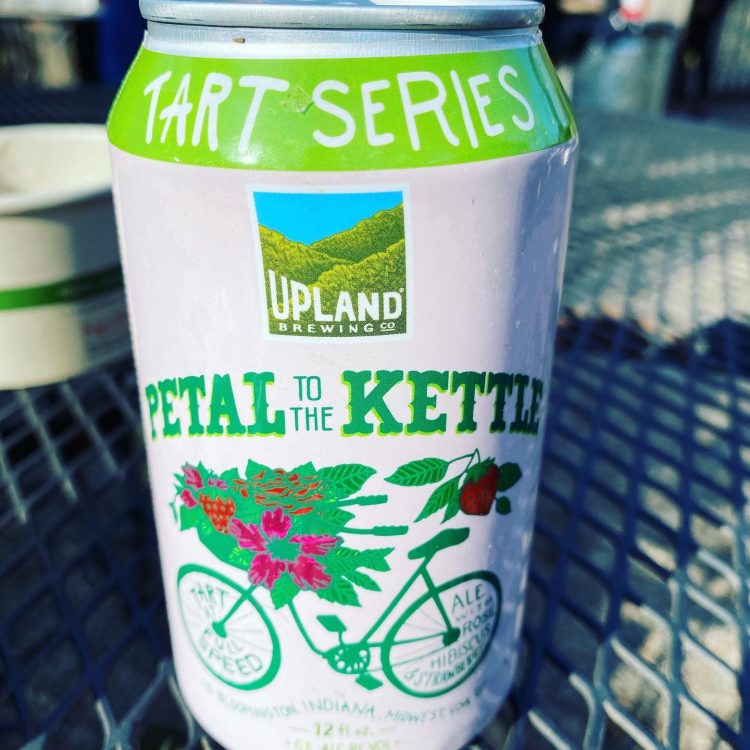